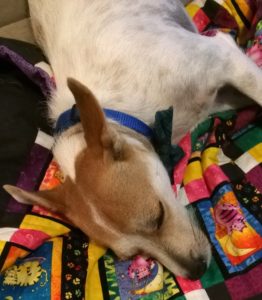 Years ago, early one morning in January, I spun out in the snow into a telephone pole.  So much for going to the gym.  The car was totaled, I spent 3 days in the hospital and 2 weeks using a walker.  Soon after, I started having massive panic attacks if I had to drive in any kind of inclement weather.

Clearly many aspects of that experience totally sucked but one positive thing happened.  In the days immediately following the accident, it seemed that all there was to do was sleep.  And sleep I did.  More than I imagined possible.  At first, I would wake up still exhausted even though I had just slept 8-9 hours.  But then one morning I woke up refreshed.  It was a completely foreign experience.

I was raised to believe that, if I wasn’t hustling every minute of the day, I would be perceived as lazy so I tried to squeeze 26 hours of stuff into each day.  As a result, my calendar was overfilled so I was either late or canceled at the last minute.  I usually fell asleep in meetings; I came really close to falling asleep behind the wheel a number of times.  But, at night in bed, often I was too wound up to fall asleep.  In the morning, I hit the snooze countless times.

I had absolutely no idea how utterly exhausted I was until I experienced feeling rested.  It felt divine!  I vowed to never let myself get that run down again.

Admittedly, I have let myself get run down again (and again…) but, after each time, I have found my way back and re-established good sleeping habits.  Plus each time, I am able to regain them more quickly than the time before.  I am able to do so because I like the feeling of being rested so darned much that I no longer tolerate feeling run into the ground.

Once you’ve driven an Aston Martin, a Honda pales in comparison.

Recovery from panic attacks is the same.  Maybe you’ve suffered from them for years, perpetually on edge, anticipating the next one.  Maybe you don’t even remember a time when you felt at peace and have lost hope that it is possible for you to stop panicking.  But it IS possible and, once you start to catch even glimpses of the freedom and the confidence, it will inspire you to experience it more and more often until you can almost not remember what it felt like to have panic attacks all the time.

And even if you back slide and have a day where you feel anxious, it will (1) not be as intense as the panic you once felt and (2) not last anywhere near as long because, now you know too much and there is no going back to that dark place.

Instead, look for triggers and practice self-care.  Maybe you will realize you need more sleep.