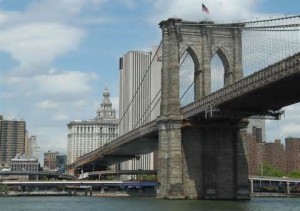 Once I helped a girl move to Brooklyn.  I arrived to get her in the afternoon but she was busy socializing.  I didn’t verbalize it but felt taken for granted.  We didn’t leave until almost 10pm – great, I love driving at night.  It was the 80’s – the age during which we inconceivably existed without cell phones and our GPS was a weathered Hagstrom map.  Neither of us knew our way around Brooklyn and I suspect she rented the room sight unseen (who does that?!) so, needless to say, we got lost, finally finding the building sometime after midnight.  As we unloaded her things, there was this guy wandering around the kitchen.  He was neither friendly not unfriendly.  There were no introductions.  I wondered if he even lived there.  She couldn’t have had much stuff if it all fit in my ’82 Civic so the unload went fast.  Immediately after we brought up the last pieces, she asked the mystery guy which bedroom was hers.  He shrugged his shoulders, she picked one then abruptly announced she was exhausted and disappeared into the room without looking back.  I stood there stunned that she hadn’t even said goodbye let alone thank you.  Once I was able to pick up my jaw off the rug, I realized I had no idea how to get home.  The guy gave me some guidance on getting to the BQE and I left.

My friend, Dan, had met her at a conference back in our Stony Brook days.  She was from Kansas and I had met her when she drove to Oklahoma to see him while a few of us were at a skydiving boogie.  A year later she moved to New York and was crashing at Dan’s house for awhile before getting her own place so she and I had crossed paths a few times during that period.  During college, Dan had picked me up from work at midnight countless times while he was teaching me how to drive so it seemed natural to offer to drive her now that I had a car.  And, besides, she and I were friends ….. right?

For years, I was angry at her — especially after I had the opportunity to confront her and she couldn’t wrap her head around why she should have at least thanked me.  But eventually I was able to look at the situation from a different perspective.  No doubt she acted rudely but I was able to let go of my suffering by taking some personal responsibility.  She had never asked me to help her. When I really thought about it, I realized I had not only offered, I had INSISTED.  She likely would’ve easily found another way to get there.  I was not the savior of the story.  Heck, we weren’t even friends.  Dan was my friend and I didn’t owe her anything.  Plus she clearly wasn’t someone that deserved my kindness.  She hadn’t given it another thought.  This issue was mine not hers.

“Resentment is like drinking poison and expecting it to kill your enemy.” ~Nelson Mandella

With that, I was able to let go of the anger.  I decided that, going forward, if I was going to do something nice for someone, I would only if I could do it without expecting anything in return.  Just to be kind.  Without martyrdom.  Without feeling taken advantage of.  With joy.  I learned this is possible because, when it is my choice to give of myself, the other person’s motivations and actions become irrelevant.  This is the crux of karma yoga.

Recently, Mike invited me to help him and another beekeeper extract honey from some hives that were being maintained for charity.  They needed a big space and had obtained access to a commercial kitchen at a soon to be defunct hotel in Manhattan.  I had never extracted before and found it to be a time consuming, sticky and arduous process.  We were there all day but never took a break so I was starving plus I was barely able to stand because, unbeknownst to me at the time, I was about three weeks away from needing a blood transfusion due to dangerously low hemoglobin levels.  Had I entered this endeavor with the wrong intentions, indeed I would have been a majorly unhappy camper.  But, instead it felt good to be able to experience something that means a lot to Mike.  I made the best of it and, in the end, was glad I was able to help them (although, if I had it to do over, at some point I would have practiced self-care and wandered out of the hotel in search of food).

One final thought on people asking me for help: despite having been raised that it is selfish to say no to a request without an iron clad excuse, I no longer subscribe to this mentality.  If I cannot give with an open heart, I politely decline.  As a recovering people pleaser, saying no felt very foreign at first but it gets easier each time.  Plus, I no longer feel obligated to give an explanation for declining.  The self-respect I have gained has been immeasurable and, for the majority of the time when I opt to help, it comes from a place of true kindness and compassion.

Look at your own patterns of “helping”.  Do you give because you are craving the praise?  Feel that the world will fall apart if you don’t?  That people will be mad at you or think less of you if you don’t?  How do you feel afterwards?  How can you lower the bar of suffering as a result of overly giving?  Can you find a way give from your heart without strings attached?  Leave a reply below.